Today’s meal was less about my kid cooking, and more about my kids eating something new. I’ve made veggie lo mein quite a bit, but I added a little different flavor this time around. I’ve noticed that Nolan prefers his food with lots of flavor (who can blame him?) It seems as though the more spice or seasonings in a meal, the better for him. When I first gave him squash I was afraid he wouldn’t like it because I had cooked it with garlic and onions and then quickly realized he loved it WAY more than plain squash. So, today we made veggie lo mein with lots of garlic and ground ginger. It was so fun to see Nolan’s faces as he took bites with different textures and flavors! Here’s how this quick and easy meal came together…

I sauteed all the veggies together in olive oil adding each one in order of what takes the longest to cook…(onions, squash, garlic, slaw, mushrooms.) Once the noodles were cooked I tossed them in with the veggies and continued to cook for a few more minutes, adding the ginger and soy sauce.  SO easy! And way healthier than anything you could get from take-out!

I usually serve this meal with a veggie egg roll. “Chungs” brand is the best frozen egg roll ever!! It makes for a good scooper when you get to the bottom of the bowl. 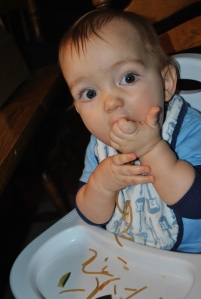 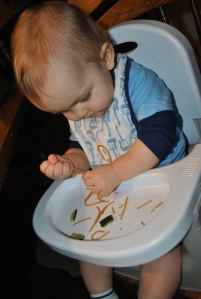 My little guys are pretty adventurous eaters but don’t always eat their vegetables like I’d like them to, so this is an easy way to sneak a ton of veggies into what looks like a bowl of spaghetti!

February is always a quick month, but it feels like it’s really flying by this time around. Although I never like to wish time away, I’m certainly ready for Spring to hurry up and get here! There have been a ton of snow days this winter and it’s really made me (and my fellow Northerner mom friends) get creative with how we entertain our little ones. I must say, I totally underestimated how brutal winter can be up North. As Floridians we have a tendency to think we get it because we have our occasional cold day here and there, even getting frost on our windows every once in a while…but it’s a totally different thing when you have 4-5 months in a row where you must wear a jacket everywhere you go, have to put hats on little ones, and drag wet slushy snow into your house every single day. Even though I lived in Ohio until I was 9, the “up North” lifestyle is a whole different ball game as an adult, especially an adult with two kids! 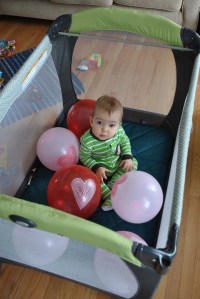 Anywaaaaaays, we’ve embraced our chilly life this month and have had some really fun times! Despite the fact we’ve missed several days of pre-school because of the snow storms, we have managed to get out and have some fun play dates with our friends. A few days before Valentine’s Day we hosted a play group for our kiddos to exchange Valentine’s cards. Unfortunately cold and flu season kept some of the little ones from being able to come, but the other kids still had a good time eating snacks, playing with balloons, and chasing each other around the house. 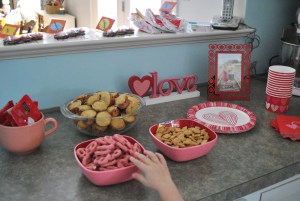 Some of our Valentine’s playdate treats- notice the little pretzel snatcher!

We got a bunch of snow the day before Valentine’s Day, so thankfully my smart hubby thought ahead and brought me a little Valentines snack (and flowers) earlier in the week…just in case we were snowed in and he couldn’t give me anything on the actual day. I know Valentine’s day is supposedly a made up Hallmark holiday, but I still love it! Flowers, candy, candles, cards…I’m a fan of all that stuff! 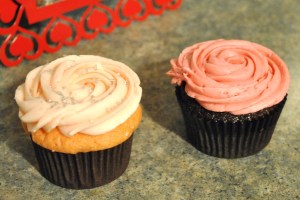 In an effort to get a change of scenery, we tagged along with Chris for a 4 day trip to Buffalo, NY. He had to work, so me and the boys did a little sight-seeing on our own and just had some fun trying new restaurants and playing in the hotel pool. We were determined to see Niagara Falls and it did not disappoint! It was every bit as magnificent as I would have imagined even covered in snow and ice, but dang, was it cold! Side note…we told Brady we were taking him to a big waterfall. He was all excited until we got there and realized it was not what he had expected. Apparently he remembered the small waterfall in the bass tank at Bass Pro Shop and was super annoyed that Niagara wasn’t as cool. You just never know what a toddler is thinking! 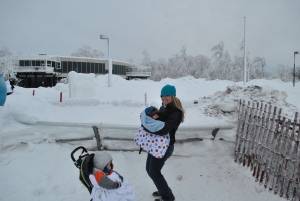 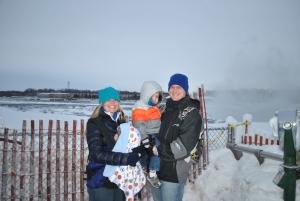 Just love that Chris was rocking my super girly backpack in these pics!

We also made a point to go to BOTH of the famous wing spots in Buffalo- Duff’s and Anchor Bar. Anchor Bar claims to be the “Original” and definitely has a cooler atmosphere, but I gotta give Duff’s the award for best wings. They were SO DELICIOUS! And I’m sure Duff’s is so honored to have won the “Our Blessed Adventures Favorite Chicken Wing Contest.”

The boys and I also managed to make our way to the Aquarium of Niagara. It was terrible weather to drive in. Like, my mom and my husband would have had a heart attack if they’d have seen how icy and snowy the bridge was that I drove over! But, totally worth it because we saw a Sea Lion show! Still questioning my judgement on that one… 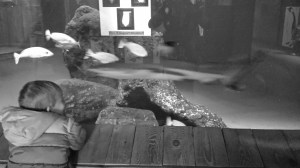 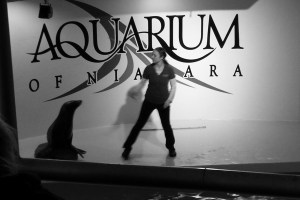 You know you’re desperate for a break from your normal day to day life when you’re willing to do a 6 hour road trip with two kids to Buffalo…in February! Buuuut, it was really fun and we came back feeling happy to be home and grateful for safe travels. I’ll leave you with a short video taken on our way back. The kids were surprisingly good (they slept a lot on the trip home) but when things got a little crazy I busted out the bubbles for entertainment (the Gymboree brand are the best!) I just love Nolan’s little giggles in this clip!

Who doesn’t like breakfast for dinner? I was trying to think of a way to mix up the normal breakfast for dinner routine and also keep it meatless for Meatless Monday PLUS have it be something Brady would enjoy helping me cook…Breakfast Pizza! It’s super simple and came out delish! (For the record, this would be great for a brunch and a meat version would be fantastic with crumbled bacon or sausage.)

We started by squishing our dough out on a pan…Brady really enjoyed this part. I scrambled up my eggs while my pizza dough was “pre-baking” for about 5 minutes. I left the eggs just a little softer than I normally like them because they will firm up a bit in the oven. After the pizza crust was pre-baked I spread out some of the softened cream cheese for the “sauce.” I then spread out the scrambled eggs. Brady helped me put on the cheese and veggies on top of the eggs. I then baked the pizza at 400* for about 15 minutes (or until the crust looks golden brown.) 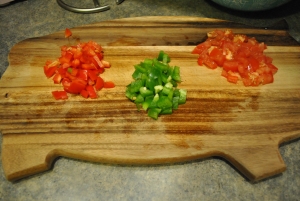 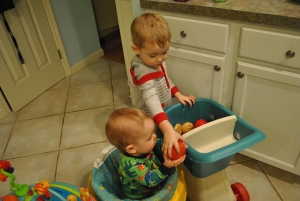 I loved how B and N were playing with fake produce as we waited for our Veggie Breakfast pizzas to bake!

It was hot, gooey, and tasty! We used Brady’s favorite veggies (tomatoes and green and red peppers) so he loved it and it was soft enough for Nolan to gobble up as well. Feel free to use any veggies you like if you give this recipe a try- onions and mushrooms would be yummy!

I just wanted to do a quick post about the importance of giving our little ones some one on one time. It’s hard to carve out a whole day dedicated to spending time with your little one when you have more than one kiddo, have errands to run, house projects to work on, are stuck inside for endless snow days…you get the point. Obviously we try every day to give our kids some special attention, but it’s rare to give one of our boys an entire day of undivided attention, but that’s what Chris did on Saturday! Nolan and I stayed back and ran errands and played at the house while Chris and Brady had a daddy/big boy date. Chris said it was a blast to hang out with just B-Man and was shocked at how much Brady had to talk about when they went out to eat and went to Bass Pro Shop to look at “big boy toys” and watch the fish. They also stopped for ice cream and went to see a live “Dinosaur Train” show at Hershey Theater. Brady had so much fun!!! (So much that he completely passed out on the way home with his toy dinosaurs in hand.) I can’t wait for my turn for a mommy/Brady date, but I have to admit, it was pretty sweet to have a whole day of snuggles with just me and Nolan. 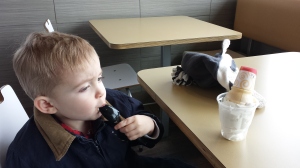 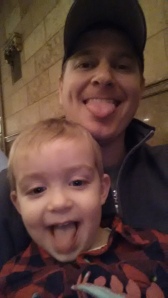 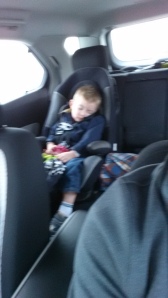 Today was a super cold, snowy day. The kind of day that you stay in your jammies and throw your dinner in the crock pot…so that’s exactly what we did. And lucky for me, toddlers are super good at dumping ingredients and stirring, so my little helper (B-Man) and I made a batch of chili. Mind you, it was a Vegetarian chili and had to be kid friendly (not too spicy.) So, here’s our recipe! 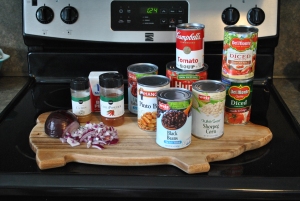 And not pictured is sugar- a tablespoon helps offset any acidity from canned tomatoes and gives it a little sweetness that’s so yummy!

I opened all the cans and drained the beans, corn, and tomatoes and Brady did the dumping. We added the sugar, half a purple onion, about a tablespoon of chili powder (put more in if you like it spicy!), a half a teaspoon of pepper, and a teaspoon of Cumin. Brady did some stirring and then we set the crockpot on low for about 5-6 hours.

To go along with our Chili and make it more fun for Brady, we made some cheesy cornbread dippers. Basically, you make up your cornbread mix and add a cup of shredded cheddar to the batter. Bake it in an 8×8 pan and let it cool. After it’s cooled completely, cut the bread into thin (about half inch) strips and put on a baking pan. Bake the strips at 350* for about 8 minutes on each side. OR, you can also put the strips on a grill pan with a little butter to give them a little char. Either method makes the cornbread have a nice dippable (is that a word?!) crust that’s perfect for dunking in chili. I actually tried both “crisping” methods and prefer the little bit of char on the ones we made on the grill pan.

Here’s our chili bowls with our favorite toppings- cheese, plain greek yogurt (or sour cream), and green onions. I shredded some pepper jack cheese on mine and Chris’s chili to give it a little extra spice since the chili was a little on the mild side.

Brady ate his chili like it was a dip. He used his cornbread, taco chips and even celery to scoop it up. I wasn’t sure what Nolan would think about it. It wasn’t overly spicy, but there was definitely a little warmth going on. But seriously, he TORE it up. Like, finished his little bowl before any of us did. I love that kid!

Hope everyone in my neck of the woods stayed warm and ate well today! 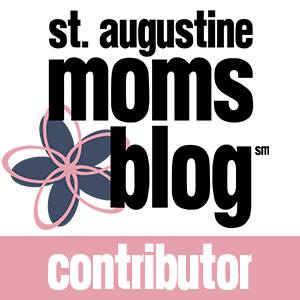