One of the reasons I am always getting my kiddos in the kitchen with me is because I love the idea of raising men who know how to cook. What woman doesn’t love a man who knows his way around the kitchen? Someday, my boys’ future spouses will be so happy their mama taught them a thing or two when it comes to food! It’s so fun to see Brady looking forward to our cooking sessions. He drags his little step stool up to the counter and now (thanks to mommy’s super Target clearance find!) puts on his Planes apron!

For this weeks meal, I wanted to see just how many veggies I could pack into a meal. Nolan is not the greatest when it comes to eating his vegetables, but he loves spaghetti, so I thought I could sneak some in that way. Although, I don’t really like the idea of being “sneaky” when it comes to food per se- I think it’s important for kids to know what they’re eating so they are aware that they actually like certain foods. I just like the idea of presenting new foods in a way that’s somewhat familiar, and of course, tasty. If I just gave the kids a bowl of spinach, it probably wouldn’t go over so well, but by cooking a yummy sauce with spinach, I’m showing Brady that he likes spinach. 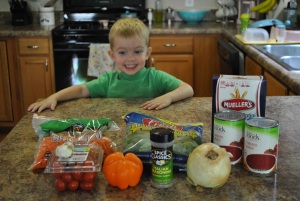 1 onion
1 bell pepper (I had an orange one on hand)
2 cloves of garlic
1 pint of grape tomatoes
1 cup of shredded carrots
1 bag of spinach
2 cans of tomato sauce
Salt and pepper to taste
~1 Tbs. Italian Seasoning
~1/4 cup Heavy Cream (optional)
1 box of your favorite pasta 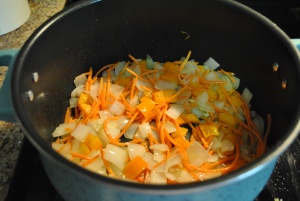 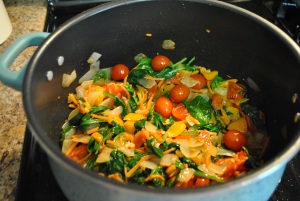 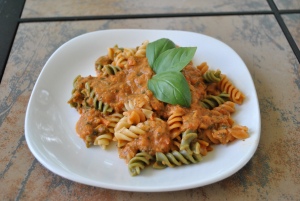 B and I chopped up the onion, pepper, and garlic and sautéed them together in olive oil. Then, we added the shredded carrots. Once they were all tender, we added the grape tomatoes. I left them whole, seasoned the pot with salt, pepper, and Italian seasoning, and let all the veggies hang out together for a while (until the tomatoes started bursting.) Then we threw in the bag of spinach and let them wilt for a minute or so before adding the 2 cans of sauce.  The sauce was super chunky at this point so I took my immersion blender and let Brady give it a few pulses to smooth it out. Last, we stirred in a little cream to give it a little creamy sweetness.

Brady was quite proud of this creation. The spinach adds lots of vitamins and protein to this otherwise “carby” meal. And even though it really doesn’t change the flavor too much, the little specks of green throughout, remind you just how good this sauce is for you. It would be super good over ravioli, pizza or in a veggie lasagna and this recipe makes a bunch so I now have a container in my freezer as well. Awesome Sauce!